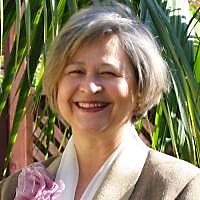 Music therapy communities in BC, Canada, and across the world lost a beloved music therapy pioneer on October 15, 2017. Dr. Carolyn Bereznak Kenny passed away peacefully in Santa Barbara surrounded by her loving family. She had been in ill health for 15 months with a cancer diagnosis while living in Vancouver and had moved to a hospice in Santa Barbara in August to be near her daughter and granddaughters. Carolyn had developed the first music therapy program at this hospice ten years ago, and with her daughter, Shannon, established a donation fund in her name to ensure that music therapy services are ongoing. At last count, mover $6,000 had been raised. Donations can be made to: http://www.vnhcsb.org/carolynkenny/

Born of a Choctaw mother in Mississippi and first-generation Ukrainian father, Carolyn was adopted into the Haida Nation in the year 1999 by Dorothy Bell, matriarch of the Masset Haida people. Her given Haida name is Nang Jaada Sa-êts, which means Haida Woman with a Mind of the Highest Esteem. Her Haida clan is Eagle and her Haida family holds the Hummingbird crest. 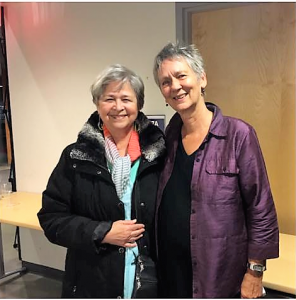 Carolyn Kenny gave a lifetime of service to her community through her scholarly pursuits, research, writing, teaching, mentoring, and presentations. She was a seasoned scholar and music therapy practitioner who engaged in interdisciplinary activities since 1969. For over 45 years she taught in higher education in the US, Canada, Norway, Denmark, Brazil, and Japan. She was an invited keynote speaker at national and international conferences of music therapists, indigenous and aboriginal peoples, medical practitioners, cultural organizations, leadership congresses, and research symposiums. She authored and edited eight books, wrote many book chapters, and dozens of journal articles. Her devoted supervision and mentoring of graduate students in many universities stretched far and wide in content and in scope. Her ability to envision combined with her strength and courage to actualize her ideas resulted in the creation of Voices open access journal (co-founded with Brynjulf Stige in 2001), Capilano College/University’s music therapy bachelor’s degree program (co-founded with Nancy McMaster in 1976), and BC Open University’s only MMT program in Vancouver (1995-1999).

Carolyn studied with Jesuits at Loyola University in New Orleans, completing her bachelor’s degree in history and philosophy with a minor in journalism. Her music therapy training was also at Loyola University. Carolyn received her master’s degree at UBC in interdisciplinary studies: anthropology, ethnomusicology, and educational psychology, with her thesis published as her first book, The Mythic Artery in 1982. Her PhD in human organization and development through the Fielding Institute in Santa Barbara, CA incorporated systems thinking into her study the role of the arts in the revitalization of Indigenous Societies. Her dissertation, The Field of Play: A theoretical study of music therapy process, became The Field of Play in 1989. Carolyn held board certification as a music therapist with the American Music Therapy Association and accreditation status with the Canadian Association of Music Therapists. She was an honoured lifetime member of the CAMT, MTABC, and AQM in addition to holding certification as a teacher, instructor of authentic movement, and in multicultural counseling.

Her research areas include music therapy theory, the role of the arts in the revitalization of Indigenous societies, the arts in leadership and change, practical philosophy, and improving policy for Aboriginal women and Indigenous leadership. Carolyn was a prolific author and one who embraced and sought out collaboration, being the editor for:
• Listening, Playing, Creating: Essays on the Power of Sound (1995)
• Contemporary Voices in Music Therapy: Communication, Culture and Community (2002)
• Living Indigenous Leadership (2008)
• Music and life in the Field of Play: An Anthology (2006)

Her last book was Music in life: Perspectives on the 1982 New York University Symposium (2105 with Michelle Forinash). Carolyn published Music and Life in the Field of Play: An anthology in 2006 that included selected writings and presentations from 1979 to 2006.

Clinically, Carolyn has worked as a music therapist with people from 3 to 102 in many different settings over her more than forty years in the profession. She began her career as an Educator and Music Therapist in 1969 at St. Michael’s School for Special Children in New Orleans, Louisiana. She also worked at River Oaks Psychiatric Hospital in New Orleans, the UBC Psychiatric day treatment Centre, Bob Berwick preschool for children in Vancouver, and the Danish Convalescent hospital in California. She had a private practice as a music psychotherapist and music therapist. 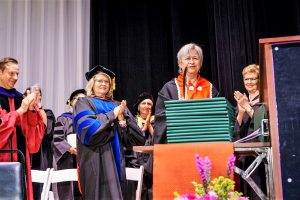 Carolyn taught at many music therapy programs throughout the world. She was a guest professor at universities in Louisville, Kentucky; Eastern Michigan, Philadelphia, California State Northbridge, Bergen University in Norway, Aalborg University in Denmark, and Senzoku and Kobe Universities in Japan. She was also adjunct graduate faculty at the University of Missouri in Kansas City, Associate Professor of First Nations Education at Simon Fraser University in Vancouver (1997-2002), the program coordinator and primary faculty for the Masters of Music Therapy program through BC Open University (1995-1999), and a Professor of Human Development and Indigenous Studies in the Antioch University Ph.D. Program in Leadership and Change (2000-2014), which honoured her with Professor Emeritus status. Carolyn was a guest professor in Lakehead University, Ontario in the department of Aboriginal education and during her last year, she taught for City University in Vancouver, incorporating the findings of the Truth and Reconciliation Commission’s work into the CityU coursework. She received the “noted scholar” award at UBC in 2014. 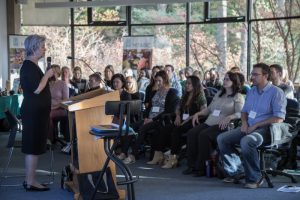 Carolyn’s passion was teaching qualitative research methods such as phenomenology, ethnography, authoethnography, arts-based research in social change, and portraiture. She was a contributor on many scientific committees for World Congresses and association journals, and had been editor and reviewer for many journals and published works in music therapy, native education, and indigenous studies. She was the CAMT editor for the CJMT from 1999 to 2004. She was involved in a current study at UBC during the last two years of her life that involves showing the efficacy of music therapy compared with the use of iPods and narrative stories.

In Carolyn’s own words: “my vision of service follows the Indigenous principle of Seven Generations. In my work, I try to help improve the quality of life for those of us who are living in this time and to imagine how life will be for the generations ahead. There is power in our imaginations. That is why the arts are so important. Whether I am serving clients in Music Therapy, teaching students, or writing, I attempt to focus on the present moments – so rich and full – with an eye for the emerging future and an appreciation of our places in history” .

Carolyn was a loving and devoted mother to Shannon and Josh and grandmother of her five beloved grandchildren. Although born in the US, Carolyn considered herself Canadian, having lived in Vancouver many times throughout her life, and retiring in Vancouver – her “spiritual home” – in 2015. She leaves many long-time friends and colleagues to mourn her passing from around the world.

For those of us in the Vancouver area, we were blessed to be able to know Carolyn personally and to have her in our midst often. She inspired Capilano University’s students and our MTABC community, mentored many of us through the MMT in the mid 1990’s and some of us through our PhD’s. Through all, she was gracious, wise, generous, compassionate, and humble. She valued beauty, aesthetics, being human, and being real but she could also be fierce when needed, protecting those she loved and felt responsibility for. She was fearless when she believed in something and stood up to organizations, powerful people, and hierarchy throughout her life. Tributes poured in from all over the world upon her passing, acknowledging the depth and breadth of her professional and personal influence, her mentorship, and her friendship. Carolyn deeply touched thousands of people throughout her life through her writing, her teaching, and her in-person beauty. We are richer for knowing her, we owe her much gratitude for all she has done for music therapy and especially for our BC and Canadian community. Her loss is deeply felt. There is a scholarship at Capilano University established in memory of Carolyn that is given to a student who demonstrates compassion to others, appreciation of cultural identity, and self-awareness in their clinical setting: https://www.capilanou.ca/programs-courses/music-therapy/Scholarships,-Bursaries-and-Awards/
It is with much gratitude and love, Carolyn, for all you gifted us, for who you are and will always be, that we say goodbye. Carolyn’s words:

I know what I know only
Because of the kindness of others and the gifts
bestowed upon me By the Creator
For this I give thanks and of
course, always, to the land. This is
why I dance and sing.
All my relations!

Membership is open to anyone with an interest in music therapy who lives in BC or beyond, regardless of qualifications or experience. Whether you are an MTA, a music therapy student or intern, or someone interested in our profession, we welcome you to be part of our association.