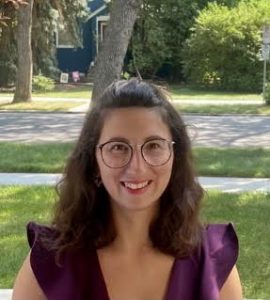 Originally from France, Lou received a Master’s degree in Music Therapy from Paris-Descartes University, a Master’s degree in Teaching and Education from ESPE Paris, and a Bachelor of Philosophy degree from the Sorbonne University, Paris. Following an opportunity to move in Canada, she obtained her MT-BC and MTA status and joined ET Music Therapy after having taught Music in a French Immersion school in Calgary. A trained percussionist, pianist and singer, Lou has been a member of various orchestras, bands and choirs in France and Canada. She is now part of Laudate Singers. Music Therapy has been her vocation since 2013 and she has worked with the autism community in France. Lou’s music therapy approach is client-centered, focusing on building a relationship of trust to support every client’s progress. She is still involved in the French Music Therapy community, writing articles for the French journal of Music Therapy.